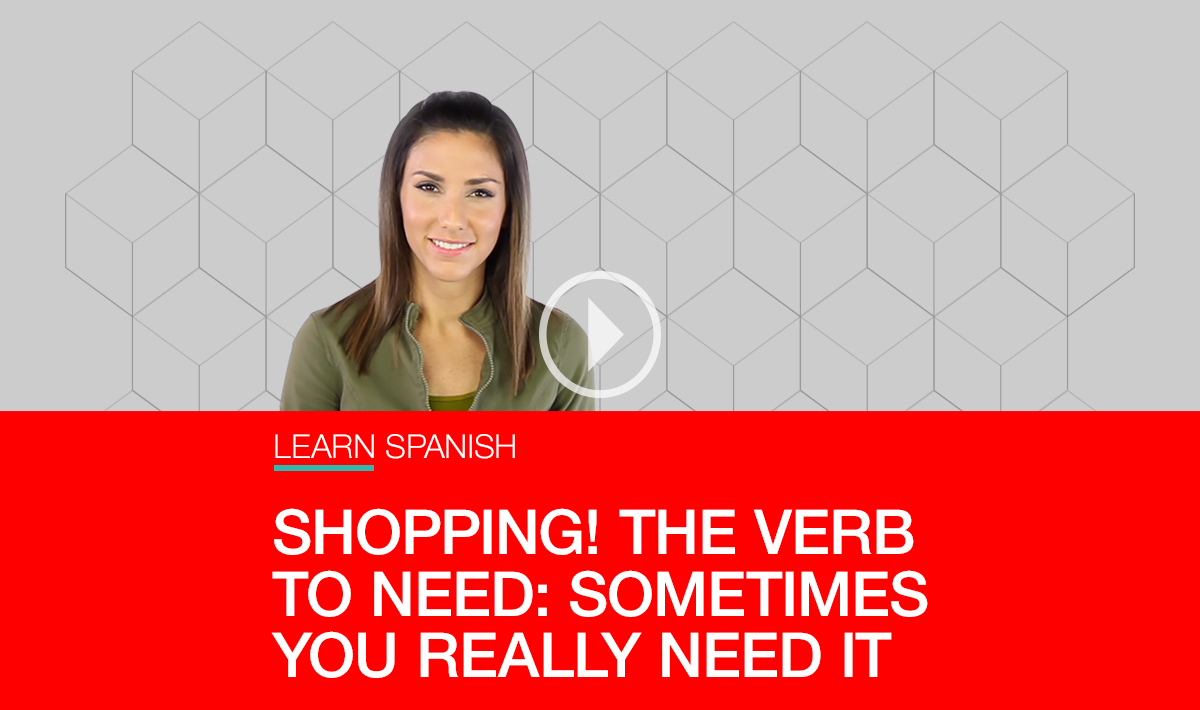 ‘Need’ is one of the most useful, direct, and powerful Spanish verbs. And learning how to conjugate it is essential to be able to use it well in Spanish. ‘To need’ is different than to ‘To want,’ because at some point there are things we really need when traveling to a Spanish-speaking country, like a bathroom, a cab, or an ambulance.

If you want to be more direct, the verb you need is actually ‘I need’. Let’s take a look at the conjugation of ‘necesitar’ = ‘to need’ in Spanish.

The subject in parenthesis means it can be omitted, remember we can always do that in Spanish. The reason is simple: each conjugation has different endings, so if you hear ‘necesito’ (‘need in Spanish’) this word tells you all the information you need to know about the subject: its ending, -o indicates it is a singular first person.

When we go shopping we might need ‘to buy’ something, right?

Let’s put these verbs together: ‘Necesito comprar… ’ = I need to buy…

What do you need? Here is some new vocab you can use to fill in that blank:

Both ‘medicina’ and ‘ropa’ are feminine nouns, but are often used without the article. Plus, ‘la ropa’ is always used in singular in Spanish.

Now that you know what to buy, you need to know where to buy it. In this case ‘need in Spanish’ is pretty simple:

‘Necesito comprar algo en…’ = I need to buy something at..

Let’s fill in that blank:

What if you don’t know where the place is? Simple, to ask where is the pharmacy?, for example, you say: ‘¿dónde está la farmacia?’

Now, when it comes to ‘la tienda’ we usually need to be more specific than that. This is the structure we use to specify:

This is the same structure we use in Spanish with constructions such as ‘ticket de metro’ or ‘subway ticket,’ except that, in the case of ‘tienda,’ the noun that comes after the preposition ‘de’ is plural:

To finish off, let’s learn a few items we always need to pick up when traveling:

We have now mastered ‘need’ in Spanish, and all of the shopping vocabulary you can pair it with. Learning numbers is crucial in this context, so you can deal with prices, the bill, and many other situations. Learn how to count in Spanish in my next video and article.

Learn Basic Spanish: The First 10 Spanish Words You Need To Learn
Go In Spanish (Go to + To go for food and places)
Adjectives in Spanish: The Power of Descriptions in Spanish