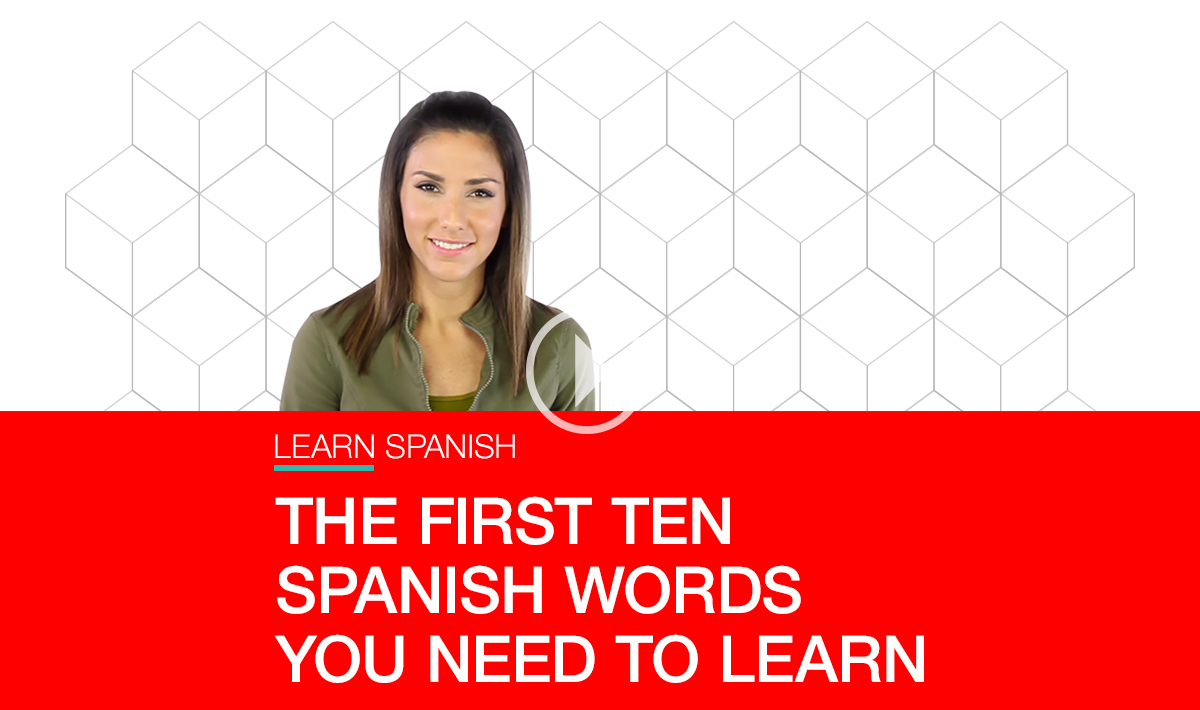 I want to show you the top ten Spanish words and how to combine them so that you can communicate in as many Spanish-language situations as possible with the fewest words. Whether you want to learn advanced Spanish or you’re visiting Mexico or Spain for the first time, these ten words are the best place to start your Spanish adventure.

If you are going to learn any two words in Spanish, ‘este’ and ‘ese,’ or this and that, are going to be the most powerful. In fact, ‘this’ and ‘that’ are the first two words you should learn in almost any language, because you can point to anything you need in a menu, a store, a market, a map, at the ticket counter in a museum or concert hall, at the front desk, etc.

How do you pronounce it?

Instead of frantically pointing-at-things you can now use these easy to learn and totally practical words.

Can you guess what this means?

Simple, ‘this coffee’… now, how would you say ‘that coffee’?

Don’t worry about the accent marks for now, it’s better to move on to more bits of useful vocab and learn a couple of new words:

Note that the letter ‘J’ in Spanish is pronounced like the English ‘H’, as in ‘house’.

The next word, ‘plato’, can be quite handy when you go to a restaurant, cafe, or food stall.

Now let’s move on to the critical verb when learning Spanish:  ‘I want.’

The trick is to combine I want (the verb) with any of the words we’ve learned so far: ‘I want this’, ‘I want that’, ‘I want coffee’… What else do you need, right?

The Y sounds like a J, as in ‘job’. In certain countries, like Argentina, you’ll find they pronounce this sound more like a ‘shh’, but here we are focusing on what is most common.

A quick note on pronunciation: when you have the letters qu + i, the ‘qu’ will sound like a K. The ‘i’ sounds like a double E in English.

The E always sounds eh, with stretched lips. And the R, which is a bit tricky, almost sounds more like a D or like the Ts in the American pronunciation of ‘butter’.

How would we say ‘I want coffee’, then?

And how about the negative form, ‘I don’t want coffee?’

‘Yo no quiero café’

See, that wasn’t so bad! Now you know the most useful words in Spanish to help you get around. Though still limited, they will help you be better understood than the manic gesturing that comes so naturally when you want to communicate right away.

Here are some crucial words you might already know:

Notice that that H is silent– it always is.

And the most basic words to reply to a question: ‘yes’ and ‘no.’ Luckily, in this case there is only one new word to learn: ‘sí’.

Now for a mega crucial phrase:

Don’t worry about the parenthesis around ‘it’ for now. You will learn more about that when we dig deeper into Spanish verb conjugations.

In Spanish you always use an upside down question mark ‘¿’ before the question. Same goes for the exclamation mark ‘¡’

reat! Now, let’s dig a little deeper into the verb ‘to want’.

Well, it’s not that simple. First, we have to learn some personal pronouns in Spanish. There are two ways of saying ‘you’ in Spanish. One is informal, the one you’d use it only with people you know:

The other is for respectful use:

Depending on the country and other conventions, people might address you with one or the other. In Mexico, you’ll most likely be addressed with ‘usted’, whereas in Spain they might use ‘tú’. Here, we’ll distinguish them with this notation:

Double L’s in Spanish sound like an English ‘J’, as in ‘Jumanji’.

You Want, He Wants, She Wants

Now let’s learn to conjugate ‘I want’ in Spanish with ‘él’ and ‘ella’:

And here’s a beauty… ‘usted’, ‘él’ and ‘ella’ ALWAYS use the same verb form. No matter the verb or the tense.

Now you can order for your non-Spanish speaking friends.

You might also be asked: ‘¿Usted quiere ese plato?’
Literally, ‘you (r) want that dish?’

Notice that there is no ‘do’ in Spanish when asking questions. Changing the intonation is enough to turn a statement into a question:

¿Ella quiere ese café? = Does she want that coffee?

‘Please’ and ‘thank you’ in Spanish

One more thing… Let’s just throw a ‘please’ in there to not come off as rude. Here are two basic expressions that you may be familiar with:

There are a couple of R’s in ‘por favor’. A little trick for rolling R’s is to really exaggerate the sounds before, so, the two O’s in this case. But don’t worry too much about it: practice makes perfect. It’s way more important to nail the pronunciation of the vowels than to roll your R’s perfectly.

So, how would you ask for coffee politely?

Excellent. Now, the Spanish word for ‘thank you’ is gracias. Note that the C is pronounced like an S.

You don’t really want coffee, then?

‘Yo no quiero café, gracias’.

Ordering the Bill in Spanish

How about ‘I want the bill, please?’

And once the waiter brings it over you’d say: ‘¡Gracias!’

Now you know the First 10 Spanish Words You Need To Learn to get going in any Spanish-speaking country, or if you’re planning on learning advanced Spanish. Don’t lose this momentum learning Basic Spanish, continue expanding your Spanish by learning more restaurant-related vocab in my next article and video.

Spanish Survival Kit: Asking for Directions
Puzzle Solved: Why nouns in Spanish are feminine and masculine
'My' in Spanish: A Simple Guide to Possessive Adjectives in Spanish