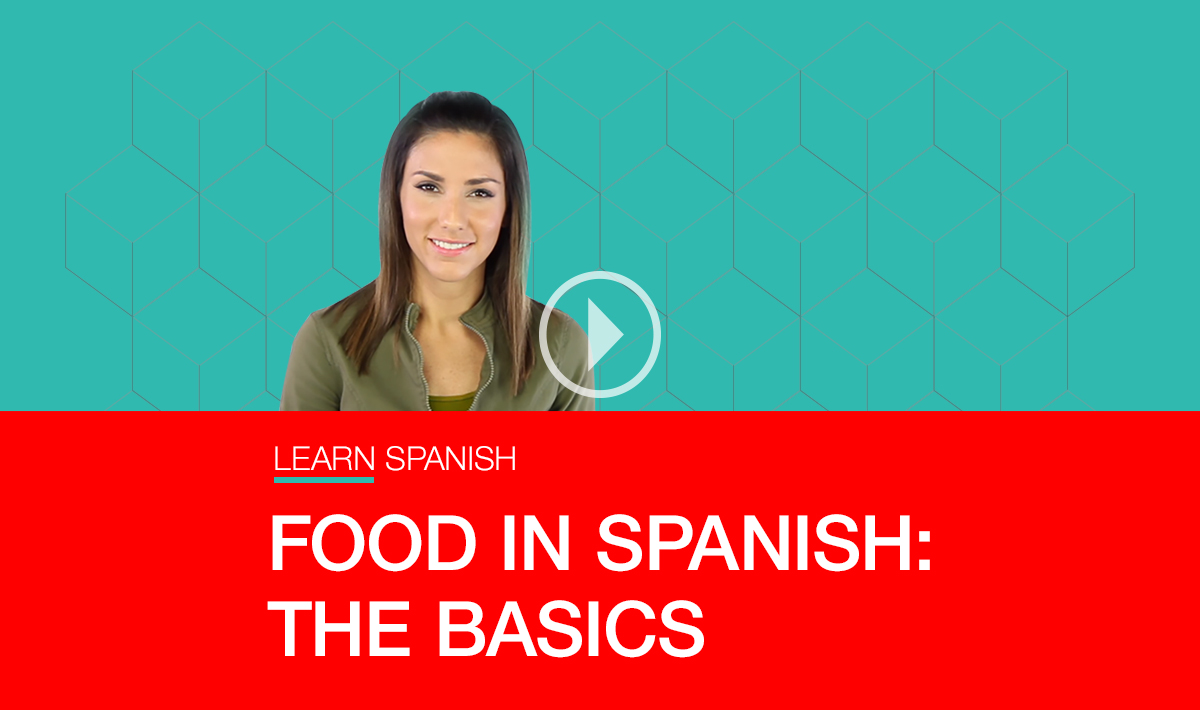 The basics of food in Spanish are simple to learn. To begin with, you already know the Spanish words for ‘taco,’ ‘pasta,’ and ‘enchilada.’ Then there is a list of the the top 15 Spanish food words, the foods people order the most, and even more useful, a quick guide on how to use articles in the Spanish language. You’ll need the right articles when referring to specific foods, but as soon you understand how articles work in Spanish you’ll be all set.

The menu = El menú (meh-NOO)
This means that ‘menú’ is a masculine noun.

The bill  = La cuenta (koo-ENN-tah)
This means that ‘cuenta’ is a feminine noun.

Usually, Spanish words that end in ‘a’ are feminine, and those that end in ‘o’ are masculine. And we say ‘usually’ because this is not always the case, unfortunately. Let’s take a look at a couple masculine nouns:

See? This one ends in ‘a’ but it’s a masculine noun.

Now that we’re at it, let’s learn some more masculine nouns in Spanish:

Note that the ‘j’ in Spanish sounds like the ‘h’ in English.
The juice = El jugo (HOO-goh)

In all countries but Spain, the ‘z’ in Spanish sounds like an ‘s.’
The sugar = El azúcar (ah-SEW-kar)

The letter ‘ñ’ (EH-nyeh) gives the Spanish alphabet one more letter than the English alphabet. It sounds like the ‘ny’ we find in ‘canyon’ or ‘Kenya.’
The restroom/bathroom = El baño (BAH-nyoh)

Here are a couple more:

Now that we know how articles work, let’s combine them with 15 of the most ordered food in Spanish:

Now that we know how to say ‘the’ in Spanish, ‘a’ is the next step. Just like the previous case, there is a masculine form and a feminine form.

With masculine nouns, we say:
A menu = Un menú
A juice = Un jugo

With feminine nouns, we say:
A bill = Una cuenta
A beer = Una cerveza

So far so good! Adding on, here are four more words that will add depth to what you just learned:

Check out what you can already say:

Do you want the tea with or without milk? = ¿Usted quiere el té con o sin leche?

Remember that, for now, in order to ask questions just add question marks to a statement and change the intonation when you say it.

Finally, to ask for the restroom in Spanish you can simply say the following sentence and someone will show you the way:

Now that you know the basics of food in Spanish, you’re ready to eat the world! Exciting, right? Seize this opportunity to dig deeper into this topic by checking out my next video and article.

Spanish Survival Kit: Asking for Directions
Shopping! The Verb To Need: Sometimes you Really Need it.
Using ‘Can’ in Spanish: A Problem Solver