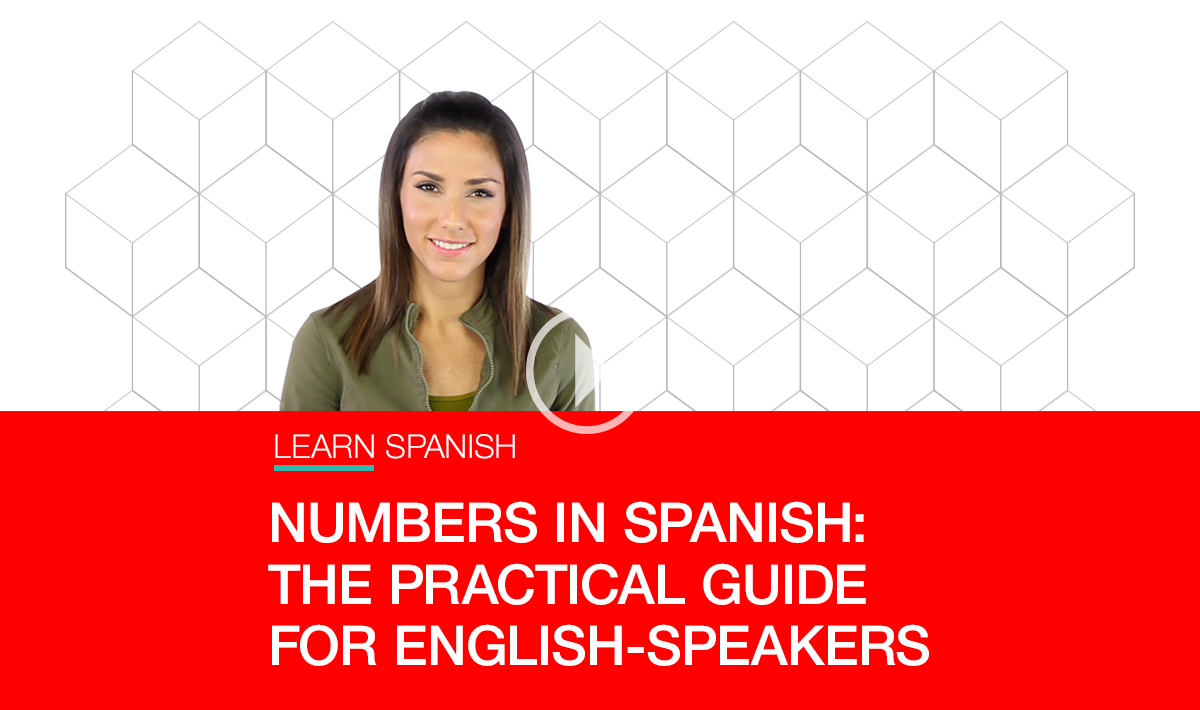 Numbers in Spanish: learn to count from 1 to 100

We use numbers in practically every situation you can think of and numbers in Spanish are no exception–from getting two coffees to meeting someone at 9. Two facts make numbers in Spanish easy to learn: you already know more than you realize–from the movie Tres Amigos to Dos Equis beer, Spanish numbers are everywhere–,and more importantly, the rules to form every Spanish-language number from 20 to 99 are actually super simple.

You might know some numbers in Spanish already, maybe you have heard them in songs or asked prices at a store. Most people remember “uno”, “dos”, and “tres”, but then, after that, things get a bit trickier. Let’s start with the basics. Here are some tricks to master numbers in Spanish.

Since there is no rule for these, you have to learn them by heart. These will be your building blocks for larger, more complex numbers in Spanish.

Numbers are always a stumble because they require a lot of memorization. That is why your best bet is taking it step by step and simply learning a few at a time really well before moving on to the next batch.

In the Fluenz Spanish program we do just that. First of all, it is not the first thing we teach, since to use numbers in Spanish you need more content: to count, you need things, and for that, you need basic words. So it makes more sense in the context  “I want 3 orders of tacos, please” or “It costs 15 pesos”.

What happens after fifteen? Counting from 16 to 30

All numbers in Spanish from 16 to 29 have one thing in common: they combine three words in one.

Notice that there are two slight spelling changes: “z” becomes “c” and “y” becomes “i”, but the pronunciation is the same.

Notice the pattern: the word “veinte” in all these numbers drops the “e” at the end: veint-

After thirty everything is smoother

Numbers in Spanish after thirty have the same structure: first the ten multiples and then the numbers from 1 to 9, and a “y” in the middle.

From 40 to 90, all numbers in Spanish end in -enta. To find the root, simply keep in mind the numbers from one to ten. That way you’ll remember the beginning faster, since they are very similar.

Sometimes people get a bit confused when they reach ‘cincuenta.’ Instead of taking the root from ‘cinco,’ they take it from ‘quince.’ With that in mind, here are a few tips to tell them apart: maybe you’ve been to a ‘quinceañera’ party or have at least seen one in her princess-like dress. ‘Quinceañera’ comes from ‘quince’ since they’re turning 15 (not 5, of course). However, if you are more visual, you can remember ‘quince’ starts with a ‘q’, whereas ‘cinco’ and ‘cincuenta’ with a ‘c.’

Now that you know your numbers in Spanish, no one can stop you!

Don’t miss my next video and article where I tell you all about describing things in Spanish.

Go In Spanish (Go to + To go for food and places)
Shopping! The Verb To Need: Sometimes you Really Need it.
El or La? Gender in Spanish: How to know when a noun is feminine or masculine